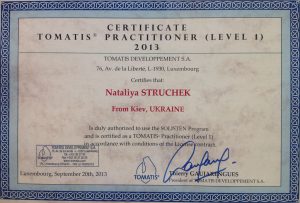 We invite everyone to use the service for working with a child according to the TOMATIS method.

The principle of operation of the TOMATIS method (www.tomatis.com) is sensory sound stimulation. Sound is transmitted in two ways: through bone conduction and through air conduction, in which sound vibrations are transmitted through the outer ear. The effect of the TOMATIS method is based on the plasticity of the nerve chains involved in decoding and analyzing sound signals, as well as the chains responsible for the ability to move, maintain balance, and coordination. Thanks to this, the method can help children in the development of compensatory strategies to overcome learning problems and speech disorders. The TOMATIS method helps a person learn to control these problems.

The service is provided by Natalia Vitalievna Struchek, a certified First Level Specialist of TOMATIS DEVELOPPEMENT S.A. The technique is practiced both with pupils of the private kindergarten "Dytina z maybutnіm", and with everyone.

A person receives information from the external environment through the eyes, ears, skin, nose (smells), and taste. If there are problems with some perception channels, then the brain does not receive the correct signals and cannot recognize them. When one of the five basic senses malfunctions, neural connections either work poorly or do not form at all. This results in various disorders and dysfunctions. Therefore, work on restoring the sense organs is the most important part in the correction of neuropsychiatric disorders and developmental delays, including autism spectrum disorder, attention deficit hyperactivity disorder, delayed psycho-motor development, dyslexia, etc.

The audio channel is the main connector between the brain and the environment, thanks to the proper operation of which a person receives, processes, and responds to 80% of the information from the outside. Moreover, the ear system ‘captures’ the sound and participates in vestibular regulation. Such a small organ, but such an important function. But what if it is violated?

What is ‘Tomatis therapy’

The famous otolaryngologist Alfred Tomatis, who was born in a family of musicians, invented a unique method of correcting the auditory system, thanks to which he gained not only worldwide fame but also helped thousands of people to restore ‘gaps’ in development.

The doctor's methodology is based on the relationship between the auditory channels and the centers of the brain. He argued that the receipt of external information by a person and its correct processing directly depends on the condition of the channel of perception - the organs of the auditory system. How does Tomatis work and at what age such therapy is useful?

It is known that hearing is physical and phonemic. If the former is responsible for hearing the sounds of the outside world, then the latter is responsible for speech recognition. Phonemic hearing helps a person to distinguish words, make sentences and speak correctly. If the phonemics are violated, the person does not recognize speech and cannot reproduce it at the proper level. With this type of hearing, Tomatis Therapy works.

Tomatis therapy is a process of alternating exposure of the hearing organ to sounds of different frequencies. As a rule, this is classical music by Mozart with the widest palette of tones and transitions, as well as own or mother's voice. Classes can be started as early as 2 years of age.

The child is put on special headphones during any activity or relaxation. In this case, you need to do something that does not require effort, tension and is not associated with other sounds - drawing, modeling, etc. Audio therapy mustn't be accompanied by eating so as not to distort the audio signal.

The technique has a beneficial effect on the development and restoration of such areas:

The results of Tomatis Therapy are long-term. The device does not program the brain to respond to certain sounds, but to independently receive signals from the environment, effectively process and respond to them.

It is also important to remember that the Tomatis is not an independent tool or ‘cure’ for disorders, but an auxiliary tool in an integrated approach. Indeed, with speech defects, one cannot expect that a child after Tomatis therapy will speak without a speech therapist and communication with people. 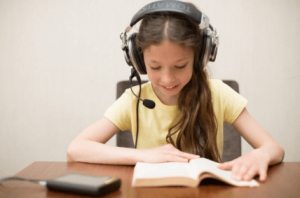 Autism Spectrum Disorders are manifested by a complex of symptoms, the main of which is the inability to build social interaction. It is difficult for a child to communicate with other people, he is closed and focused exclusively on his interests and inner world. This behavior is not associated with an innate temperament and a conscious choice to avoid society.

Mirror neurons in the brain are thought to be malfunctioning in autism spectrum disorder. They are responsible for predicting, including motor, planning, and empathy. Due to insufficient development of neurons, autistic children experience difficulties in communicating with others - they do not make contact, do not understand people's feelings, and do not feel pity. Tomatis directly affects the mirror neurons through the ear system, ‘teaching’ the child to recognize new signals and respond to them by changing brain activity and, accordingly, behavior.

Parents and educators need to remember that Tomatis in autism is not a magic pill, but an auxiliary method that, together with others, reduces the symptoms of the disorder.

Tomatis therapy is indispensable for delayed speech and mental development (DSMD) of a child. The method teaches to control the sound flow - the alternation of consonants and vowels, stress, tempo, etc. - forming words and sentences. This happens by changing the child's own voice in the current time mode, which has a beneficial effect on the perception of language by improving bone and air (through the ear) conduction.

It is important to remember that DSMD is not an independent disease, but the result of brain and nervous system dysfunction. Among the diseases that cause psychoverbal delay are:

Tomatis does not affect the underlying disease, but the concomitant symptoms. Therefore, it cannot cure education in the brain or get rid of autism, but it significantly improves both the condition and the manifestations of the underlying disease. According to the Tomatis Canadian Center, parents (95%) reported improvements in:

Tomatis looks like a banal listening to music and words in headphones, so many parents are convinced that this pastime is suitable for all children. But this is not true. Contraindications:

Before Tomatis therapy medical confirmation of the contraindications absence and an electroencephalogram is necessary to exclude pathologies invisible to the eye.

In the ‘Child with Future’ kindergarten Tomatis therapy can be included in the correction program on the parents request. For questions about the Tomatis, as well as for advice, please contact our professionals.