Many young preschoolers have speech defects. Some children under the age of 2 are lazy to talk and are silent, others chatter incessantly swallowing the endings of words, others - do not pronounce half of the alphabet. Most of these problems disappear and smooth out over time, and many parents do not attach much importance to them. However, not all children are able to learn to speak correctly, and speech defects only get worse with age. We are talking about alalia - an increasingly diagnosed speech disorder that does not go away by itself. What is this diagnosis and what should parents do?

What is alalia? What forms of alalia are distinguished?

Alalia in children is a profound brain disorder, as a result of which the child's speech is either absent or there are serious defects in pronunciation and comprehension. At the same time no pathologies of intellectual development or damages of the speech and hearing aid are observed. That is, babies with Alalia are potentially ready to learn speech skills according to age, but as a result of organic lesions of the speech areas of the brain, they cannot do so.

Unfortunately, speech alalia is a disease whose causes are still unknown. But doctors note the factors that increase the risk of pathology of speech centers

Studies confirm that children with alalia have the above factors. However, their presence does not guarantee the development of the disease, but only indicate the likelihood.

In order not to miss the alalia and not to waste time waiting for "magic healing" or "outgrowth", parents should use the norms of speech development of the beloved child and compare the age norms with the real picture. Signs of pathology:

Alalia, the symptoms of which are observed by parents at the age of 3, is a reason to consult a specialist immediately. Not necessarily increased physical activity or inability to tie shoelaces is alalia. However, the above speech signs indicate a problem.

Features of a motor alalia

In motor alleles, the child is affected by the area of ​​the brain responsible for speech reproduction. That is, the baby understands everything, but is not able to adequately clarify. Motor alalia, symptoms:

With sensory alalia, the baby suffers from pathologies of the center responsible for impressive speech comprehension - the inability to relate sound and meaning. Such children do not understand the addressed speech, do not distinguish in the flow of words and expressions, although they can speak well on their own. That is, a baby with Alalia can talk for hours without getting tired, but his speech is meaningless for him and others./

In the International Classification of Diseases, 10th Revision (ICD-10), motor and sensory alleles are described as a disorder of expressive (F80.1) and receptive (F80.2) speech..

Any kind of alalia not only causes domestic inconveniences, but also seriously affects the future of the child. Alalia, whose symptoms were ignored at the age of 2, will not allow you to study properly at school, communicate with other people, learn new knowledge due to dyslexia or dysgraphia, develop personally, which significantly impairs the quality of life. Therefore, parents should remember: if something is confusing in speech development or there is a suspicion of pathology, you must immediately seek consultation. It is better to refute the diagnosis than to miss precious time for treatment.

At the same time, parents cannot diagnose on their own on the basis of "something the baby does not talk much," and even more so to take treatment - such an approach can harm the child. Only a competent doctor after diagnosis can confirm or deny the disease.

Diagnostics of the alalia

To make a diagnosis in Ukraine, it is necessary to undergo consultations with several narrow specialists - a pediatric neurologist and psychologist, an otolaryngologist (to exclude hearing loss), a pediatrician, and in some cases a psychiatrist to identify possible concomitant mental disorders

Doctors analyze all information about the child - from the period of pregnancy of the mother to the current level of development and social conditions of the child's life. A complete history is necessary to clarify the diagnosis and determine the prognosis, however, the final diagnosis is possible only after the detection of brain pathologies. For this, the child needs instrumental diagnostics: EEG, X-ray, MRI or echoencephalography

After consultations (test for alalia, communication with parents, etc.), the doctor prescribes therapy - correction of alalia, taking into account the individual characteristics of the child and concomitant pathologies.

Predictions directly depend on the severity of organic brain lesions and the patient's age, because the earlier the treatment of even complex cases is started, the higher the likelihood of "catching up" with a child with alalia peers. With timeliness (early intervention) and correct correction, as a rule, the prognosis is favorable, and secondary intellectual impairments are not observed. However, according to statistics, speech with sensory alalia is restored faster than with motor. 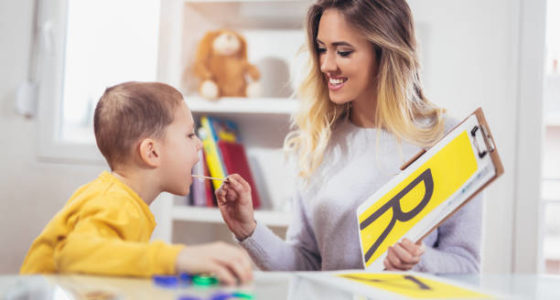 It is impossible to cure alalia by taking one pill for a month or by several sessions with a speech therapist. Correction of sensory alalia, as well as treatment of sensorimotor alalia or motor alalia, is a complex of corrective measures in which both defectologists, child psychologists, speech therapists, and the child's parents, who cannot do without their help, are involved

The main task of correctional work with alalia is to activate the child's speech function at all levels. That is, to teach the kid to recognize sounds, give the correct meaning to what he heard, correctly reproduce speech and use it for meaningful self-expression.

There are many institutions involved in the restoration and development of speech functions in Kiev - for every taste and wallet. The price of the issue depends on the severity of the alalia and the specialists that the child needs. So, motor alalia, whose corrective work is aimed at teaching correct expression, is completely different from the direction of influence on the sensory or mixed type. Systematic complex work with several specialists is best "assimilated".

For high-quality correction, and, most importantly, consolidation of the results, teachers use several types of therapy, therefore, the treatment of alalia in children should be comprehensive:

Medicines for alalia are rarely prescribed and mainly to eliminate the symptoms of concomitant pathologies - the effectiveness of drugs for alalia has not been proven.

Also, parents should strictly follow the instructions of doctors and teachers, training the acquired skills at home. You need to do this, as well as attend correctional classes, on a regular basis. This will help to achieve and, most importantly, to consolidate the result.

Kindergarten for children with special needs "Ditina z maybutnim" provides its pupils with a full range of services for the correction of alalia. Professional educators with many years of experience work daily individually and in groups, gradually developing the child's speech. And to achieve the best result and prevent speech defects, the institution works with children from 1 year old! For advice, assessment of the level of development or enrollment of a child in kindergarten, please contact the professionals in the kindergarten "Ditina z maybutnim"